Hyundai currently makes a solid lineup of performance cars powered by internal combustion engines, but the Korean automaker is also a big player in the race toward electrification. As such, it seems to understand that a balance must be struck between the new world of EVs, and the known quantity that is internal combustion. A lot of people don’t want change, and according to a recent patent application, Hyundai still wants to cater to ICE buyers, even if the car doesn’t have an internal combustion engine.

A patent app document published last week on March 24 details a system by which idling, gear changes, stopping/starting, and more are all simulated via audio cues, visual displays, and vibration from the car’s drive motor. The text claims that a person who is used to driving an ICE-powered car “may be bored due to the absence of an ICE, a transmission, a clutch, or the like,” when they buy an EV. As such, it might be desirable to “differentiate an EV by providing a function for virtualizing the driving characteristics of an internal-combustion-engine vehicle.” In regular English, that translates to programming an EV to behave like a car with a gas-powered engine.

Now, this may sound familiar. Toyota is also considering doing something like this in its electric vehicles. In a nutshell, the Japanese automaker sees potential in simulating a manual transmission in an electric vehicle. This patent app from Hyundai is a little less enthusiast-focused, though. It seems like it’s designed to be applicable to any regular EV without adding or removing any hardware. It uses the speakers to make ICE-like noises, the digital cluster to present fictional engine data like RPMs, and the car’s drive motor to create the vibrations. 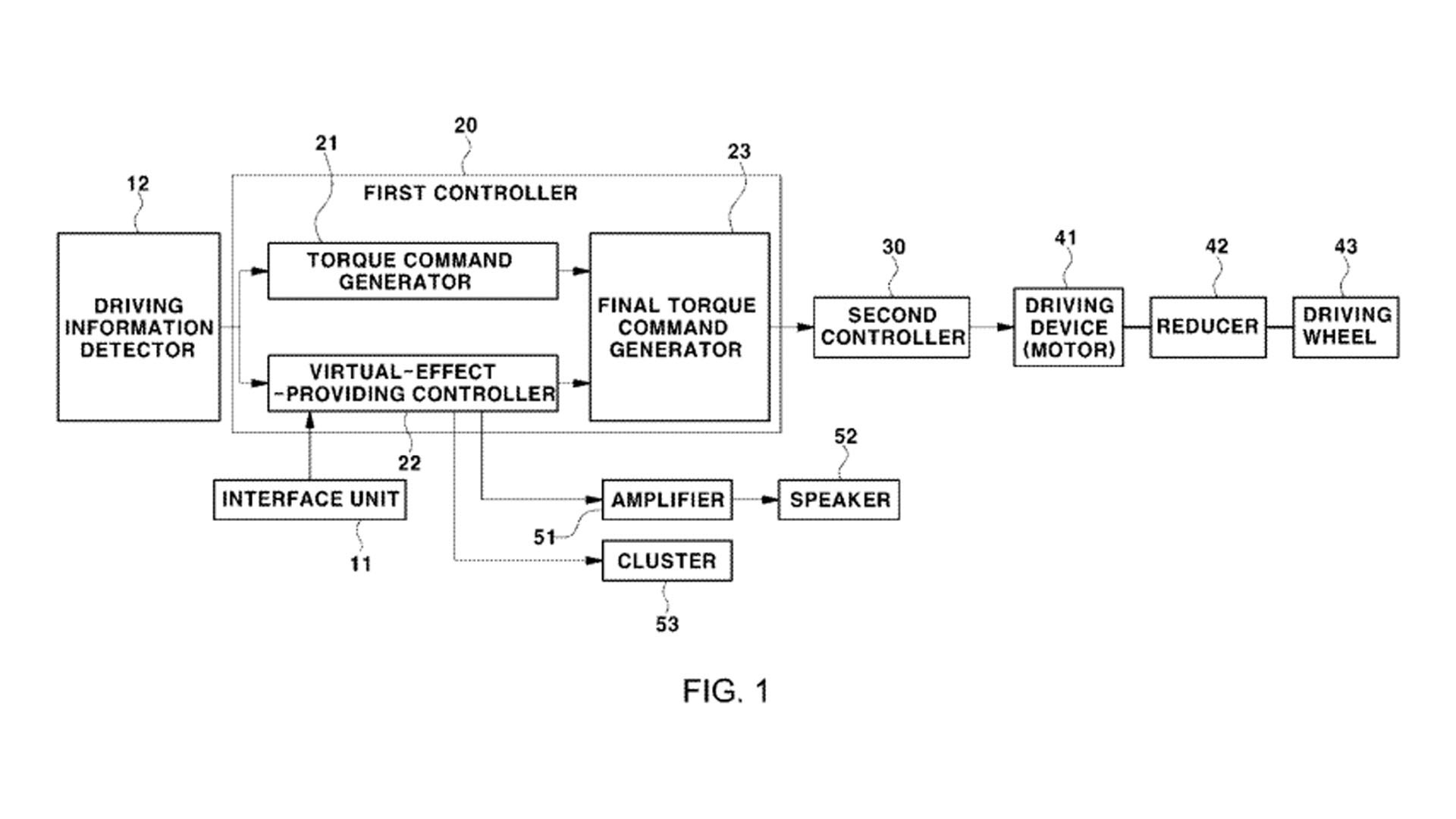 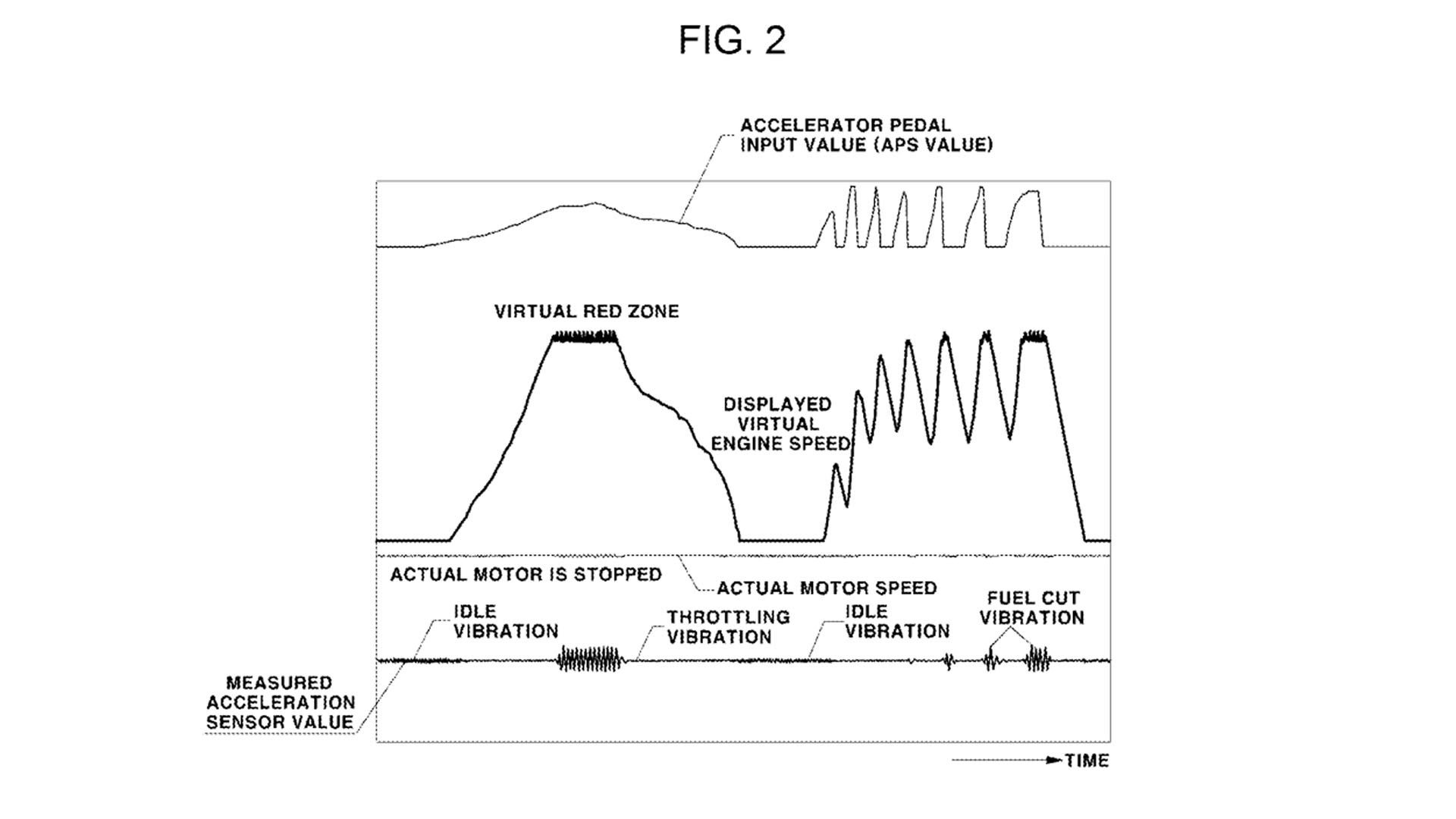 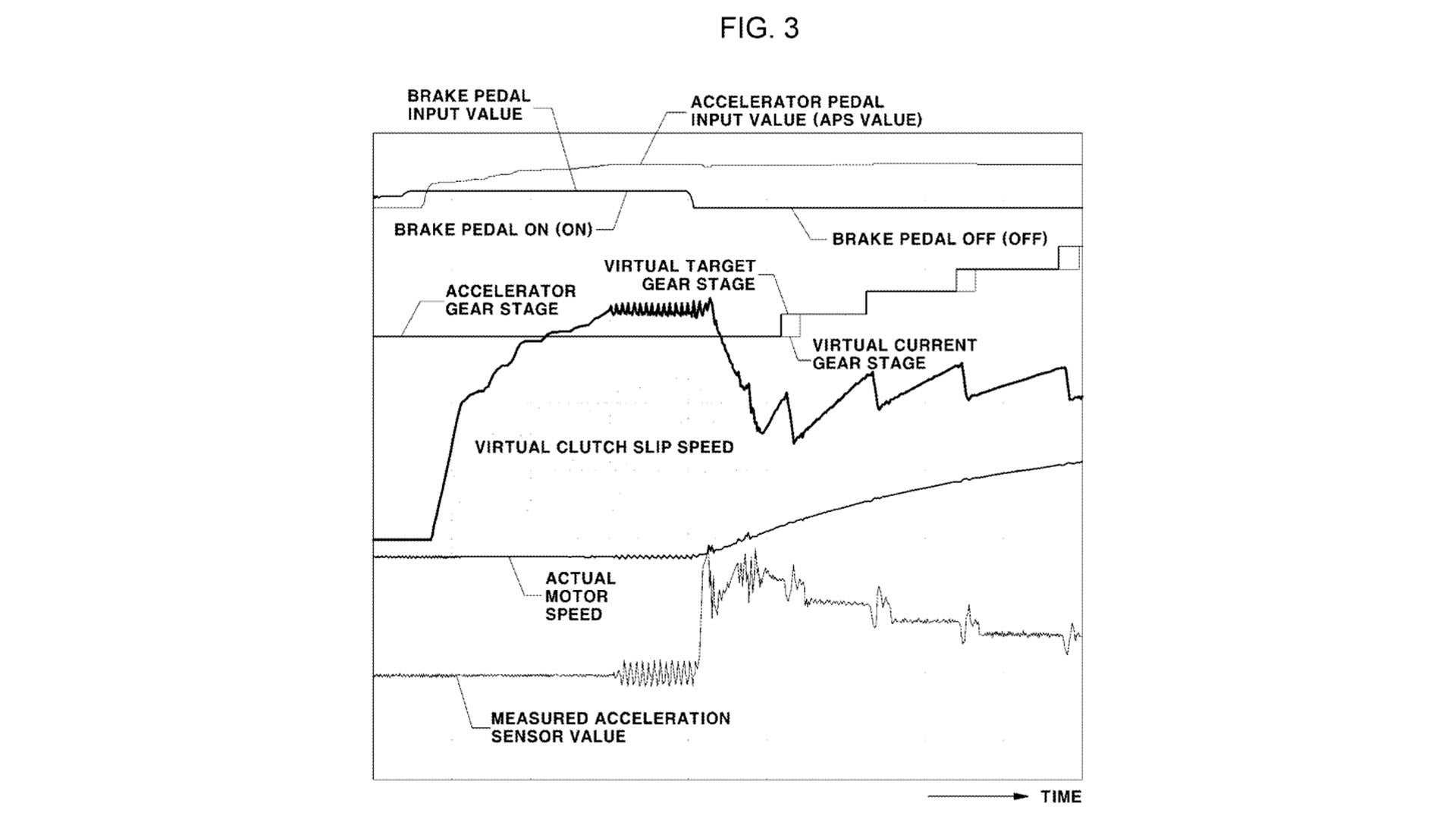 The vibrations are, well, exactly what you would expect out of a car with an internal combustion engine. At idle it would vibrate just a little bit, and then as the car accelerated the frequency would increase until a fictional gear was changed, at which point the software would simulate that too. Different sorts of internal combustion engines could also theoretically be simulated, it says, such as an engine where “boost of a turbo charger is increased.” So yes, Hyundai could make your EV feel naturally aspirated or turbocharged depending on what you wanted. Launching the car via pressing the brake and the throttle at the same time, and then releasing the brake, is also mentioned. The document says appropriate vibrations would be determined for this sort of high-intensity scenario as well.

Art provided with the patent app shows this virtual drivetrain would have eight gears, although the number of ratios is not speculated upon in the document itself. In theory, the number of gears could be selected by the user, or determined by Hyundai itself. As far as the vibration signature and sound of the engine, that’s also seemingly infinitely customizable.

We’ll have to wait and see if any of this stuff actually comes to light. It could be that it stays on the drawing board, or it could only be available as an obscure option via an over-the-air update.