AMG is a slightly weird brand. It’s the performance and sporting sub-section of Mercedes and it goes around making faster S-Class sedans as well as, you know, the occasional F1-inspired hypercar. Of course, there’s nothing wrong with having tuned-up versions of regular cars but sometimes you get the feeling that the engineers in Affalterbach would rather be making the extremely silly stuff.

It’s been a good few years for them, if they have, because AMG’s latest hybrid platform is based off F1 technology—and that’s not just hyperbole or an attempt to sound cool. The battery, energy recovery system, exhaust, and turbocharger are all cooperations between AMG and Mercedes’ High Performance Powertrain research and development division, which makes the inarguably (after 14 straight titles) successful F1 power units. 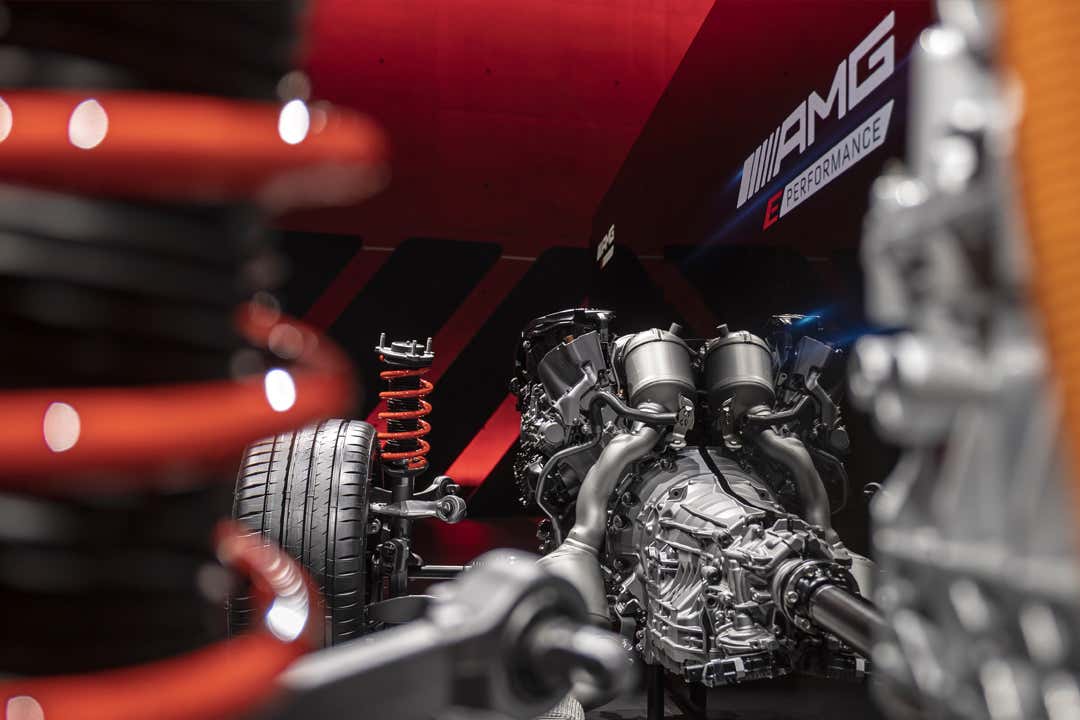 If that sounds like AMG flexing on its brand family, then that’s not even the most interesting thing about the E-Performance platform. It has a four-cylinder engine coded AMG M 139 installed under the hood, which is where you’d expect it to be. The rest of the hybrid system, though, including the battery and the energy recovery system, is integrated to the rear axle for more direct energy recuperation.

Then there’s the really clever bit, which is a two-way drive shaft that links them so that the electrical system can supply torque and balance to the front axle, as much as the engine can reverse that to the rear. It’s the sort of thing that takes a while to get your brain around, but there’s a geared section in the middle of the car that lets it go both ways. It’s clever stuff, designed to deliver the most power in the best way possible. 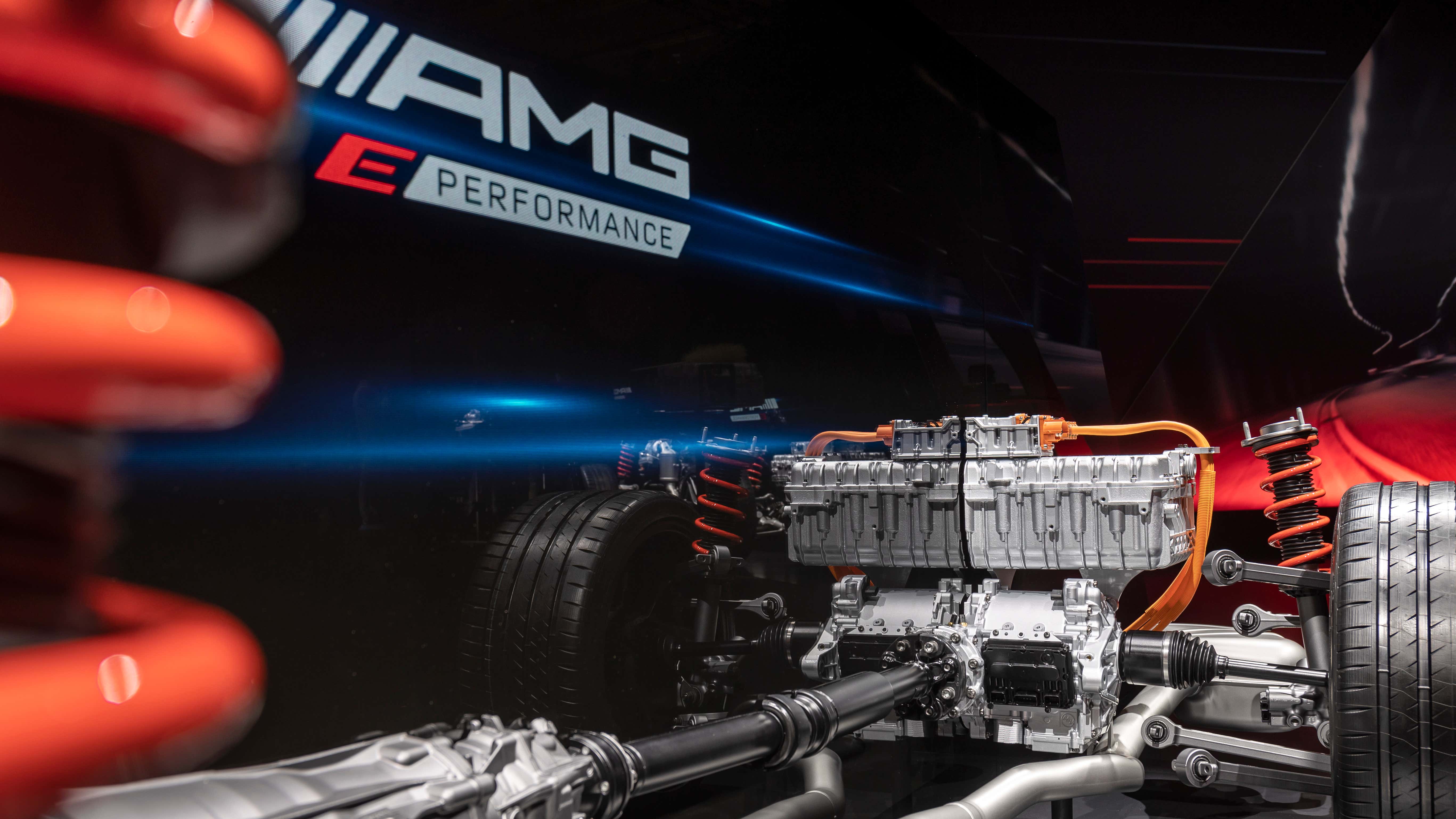 The new E-Performance platform slots into AMG’s performance strategy in a similarly two-prong way; after announcing it’d be making high-performance electric vehicles, this is going to be its very own platform for combustion. At a media Q&A about the new platform last week, AMG CEO Philipp Schiemer said, “Our powertrain strategy for Mercedes AMG is based on two pillars: firstly, performance hybrids with a completely independent layout. Secondly, battery-electric models based on the new Mercedes ECU platform for vehicles of the executive and luxury class.”

So the E-Performance platform is the real AMG baby and it’s been made with a lot of love. It’s developed completely in-house by AMG itself and uses only AMG technology, from hardware to software, albeit with a distinct influence from the F1 team. AMG is aiming to take the F1 cooperation further after successfully translating the race car’s powertrain to the road in its Project One hypercar. The E-Performance platform is a refinement of that to make it something that delivers incredible performance but doesn’t need a team of engineers to keep it going.

The direct translations are all over the platform starting with the 6.1-kilowatt-hour, 89-kilogram, direct-liquid-cooled battery. Developed from the start with HPP, it is designed based on what Mercedes really uses in the hybrid systems on-track. The battery is an important part of any hybrid system but it’s at the core of the E-Performance platform, partly because of its positioning as part of the rear axle structure but also because—and this might surprise you—it’s a plug-in. 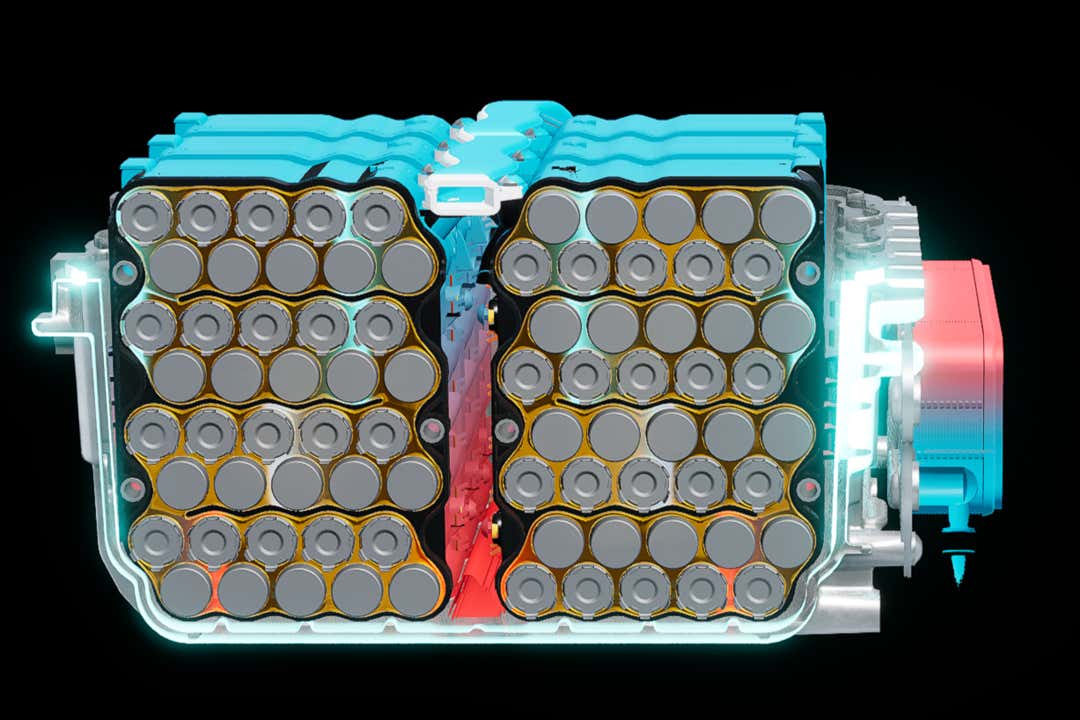 That’s definitely different from an F1 car, which is absolutely verboten from being charged before a race, only recovering energy from fuel burned on track. And it feels like a bit of a weird quirk that, yes, the E-Performance platform has an all-electric mode. AMG wouldn’t be drawn on range figures (which will depend on the cars the system is ultimately placed into) but 6.1 kWh isn’t a lot of mileage on its own and feels almost like a strange addition, except that the idea of this system isn’t purely for ultimate track day speed.

AMG planned the system to have a fully electric mode for first-and-last mile. If you’re buying an AMG, let’s face it, you’re probably not actually that worried about making sure you get the PHEV government discount, even if Ferrari is doing it, so presumably this isn’t a quick cash-in; it’s planning for cars using the E-Performance platform to actually be able to get around where there are emissions restrictions.

The electric drive unit delivers up to 150 kW of power at peak, continuously delivering 70 kW as part of the hybrid system. That “always-on” element is a key part of how AMG has developed the E-Performance platform; the electric elements of the hybrid system are not there just to give a burst of additional power, they are integrated into the overall performance. The system delivers up to 480 kW (643 horsepower) and there will always be an element of that which is being done by the rear electric motors.

The system also features front electric motors for torque vectoring and performance, but it’s the rear system that continuously recovers up to 90 kW and delivers power to the car. That’s why that tiny battery comes at such a hefty weight, its liquid cooling system essential to maintain a constant charge and discharge. All 560 21-700 cylindrical cells are kept at a steady 45 degrees Celsius (113 degrees Fahrenheit) by the constantly circulating liquid cooling, so the car doesn’t risk derating or performance loss. 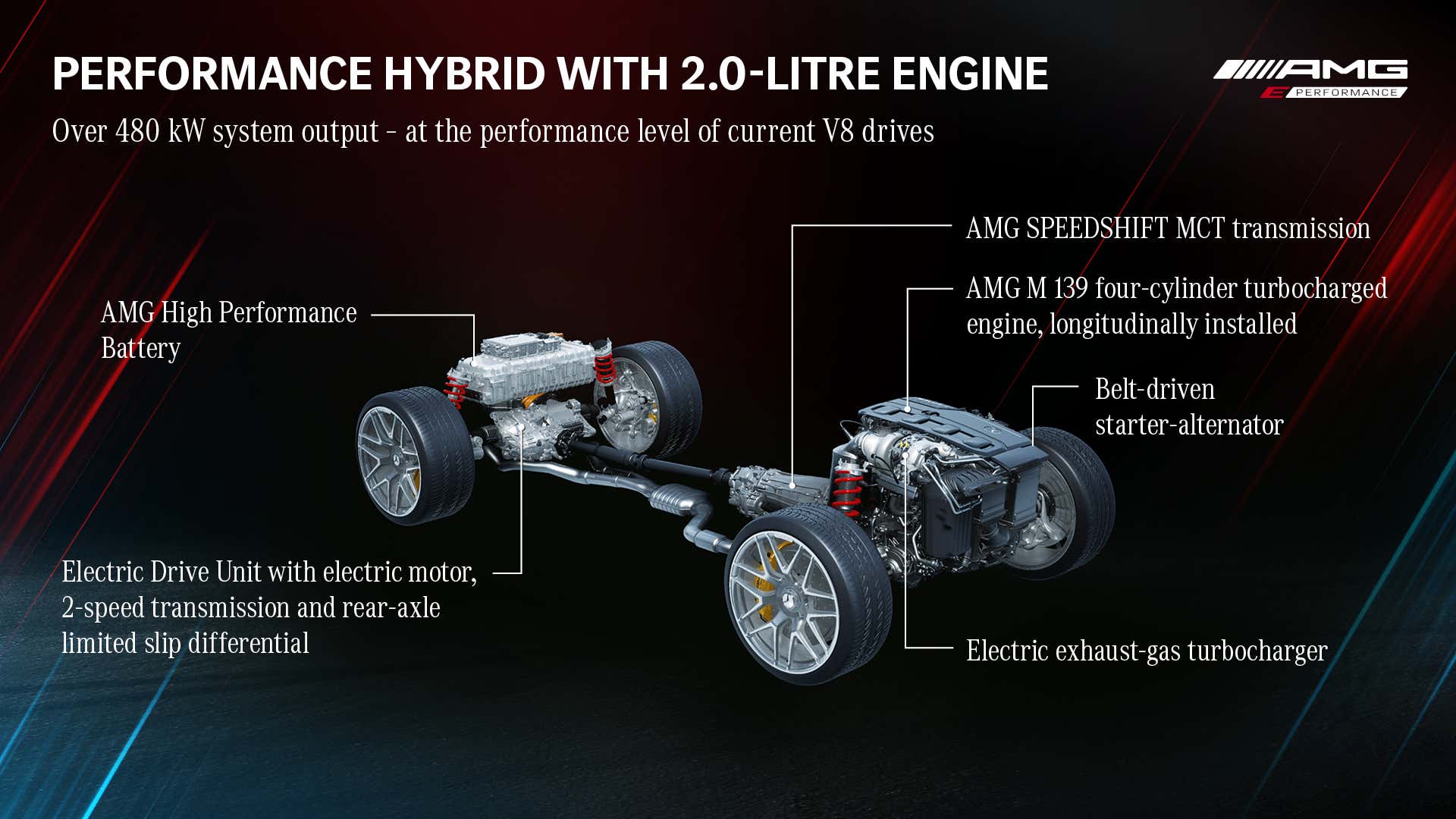 For petrolheads, there’s plenty of details to love about the engine as well. The 2.0-liter four-cylinder is a known commodity but for the E-Performance platform, its been mounted longitudinally rather than transversely, with the electric turbocharger placed directly on the cylinder head for maximum efficiency. There’s more F1-drawn elements here; the exhaust-gas turbocharger uses programming inspired by Mercedes F1’s power modes to optimise torque and efficiency, the wastegate is inspired by F1 technology, and a transient, high-RPM system makes turbo lag a non-concern.

And it works, as the electrical drive unit does, in harmony, sharing the driveshaft. The clutch system in the middle of the all-wheel driveshaft balances the torque from both engine and motor to deliver power not only to the front axle from the engine and the rear axle from the motor but a balance shared between the two. When the car’s in all-electric mode, the shaft still provides all-wheel-drive from the motor alone.

The E-Performance platform is an almost embarrassing wealth of engineering. Meant to be used in all AMG’s hybrid cars going forward, it’s designed to impress and will doubtlessly come with a price tag to match. But no one’s buying an AMG performance car as a budget runaround. When this gets fitted to a chassis, it’s going to be very exciting.

AMG was cautiously circumspect about announcing a delivery date for the first cars using the system—a sensible measure, in 2021—but said that we should see them before the end of this year. 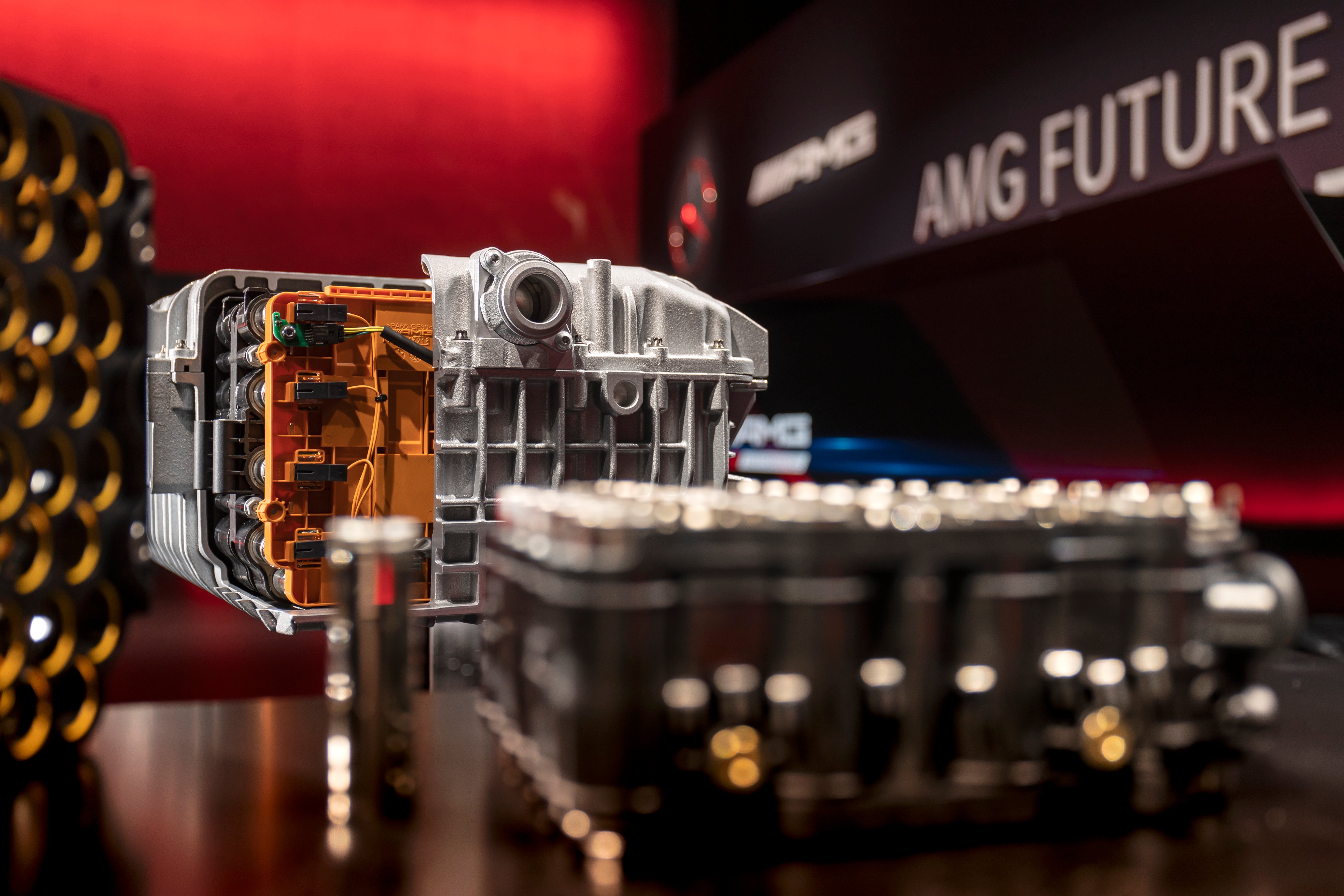