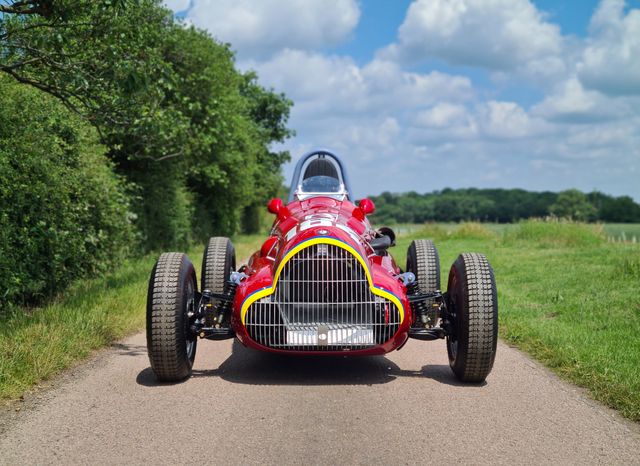 Racing is usually expensive, but rarely more so than when it involves the beautiful, exotic Grand Prix cars from the era straddling World War II. Most competition machinery from this period has long since reached the point where none but the richest can afford to own or compete in them.

But now a small British manufacturer is offering an alternative. Build one from kit form and the car you see here, Dowsetts Classics’ Tipo 184, could be on a track for less than $25,000 at today’s exchange rates, plus the cost of the second-generation Miata that you have to donate for its engine and suspension.

The idea of using Miata running gear as the basis for something rarer and groovier isn’t a new one. The difference here is both that Dowsetts has created a reasonably convincing impression of an Alfa 158, but also that there should be a race series for the cars in the UK, and the firm hopes to also introduce one in the U.S.

“It’s not meant to be a replica, it’s an evocation,” Dowsetts’ CEO Jeremy McNamara told Autoweekwhen we spoke to him after the Tipo’s unveiling in London. “The original 158 was a one and a half liter and had eight cylinders, hence 158. Ours is a 1.8-liter four-cylinder, hence 184.”

The modern parts aren’t hard to spot, with the Miata’s front wishbones and hubs sitting further outwards than those of a narrow-tracked 1930s racer. But using the original suspension subframes with a new steel chassis greatly simplifies the build process, as does pre-formed glassfiber bodywork.

“There are six bolts attaching the subframe at the front and eight bolts attaching the one at the rear – and our chassis is designed to accept them both as they are,” says McNamara, “we’re saying that 200 hours is a realistic time for building one of the kits, and that includes stripping the donor car. It depends on your skill level, but a keen amateur could do most things without any problems. You’ll have to bend your brake pipes, or get them done, because it’s too hard to ship pre-bent brake pipes. But there is no welding and no fabricating.”

The original idea for the project came from Ant Anstead, the TV show car builder who part owns Dowsetts in the UK. He built two previous vintage Alfa lookalikes, with the more recent – a near copy of a 158 Alfetta made for his ‘Master Mechanic’ show, using an MGTD chassis and a 2.0-liter Alfa engine. That one sold for $100,000 at Barrett-Jackson’s Scottsdale auction in March. The decision to create a version that could be produced more widely and easily led to the decision to switch to a more plentiful base car – second-generation ‘NB’ Miatas produced between 1998 and 2004 are available and cheap on both sides of the Atlantic. But it has also required substantial safety modifications.

The Tipo 184 gets an integrated roll hoop and a much stronger chassis than a real 1930s racer, the underbody structure having been designed with input from British racing’s governing body, Motorsport UK. It is also able to accommodate much bigger drivers than an original car could. “We’re actually going to stretch it a little bit for the production version beyond the prototype, so it will be able to accommodate people up to six-foot-two or six-foot-three safely,” McNamara promises.

For the proposed UK race series all cars will have to run a common specification, this using a non-VVT version of the 1.8-liter engine and a five-speed gearbox. (McNamara admits the eight-branch exhaust manifold, referencing the straight-eight engines of the original Alfa 158, is “a bit of theater.”

With around 140 hp working against 1550lbs of mass the finished car won’t be scary to drive, but using period-sized Blockley crossply tires should keep the handling interesting, especially on tighter tracks. The cars get unique coilover springs and dampers but lose the Miata’s anti-roll bars. They will have unassisted steering but keep servo assistance for four-wheel brake discs, this running without ABS.

The plan is to run events through the British Racing and Sports Car Club (BRSCC) on a variety of British tracks, with meetings featuring a 15 minute qualifying session followed by two 15 minute sprint races. McNamara says he is confident Dowsetts will have enough cars to support a series in 2022.

“You do need critical mass, which is going to be about 15 cars,” he says, “so let’s say you need to have 25 out there because not everybody is going to be doing every race. We think we can achieve that next year.”

Dowsetts has also been talking to both individual customers and racetracks in the U.S. “Some tracks are interested in buying several cars so they can run them together,” he says, “good for corporate days, or a group of friends racing.” The longer-term plan is to also produce the car in the States to reduce shipping costs, McNamara saying the plan is to use a Virginia-based supplier to make the frame and handle American distribution.

Richer and less mechanically minded buyers will also be able to purchase fully assembled cars, although for around three times the price of the self-assembly kit. McNamara says a Tipo 184 built to the same standard as the demonstrator you see here will be around £49,300 / $68,500 in the UK. There are also plans to offer a road conversion kit to allow it to be street-registered in some jurisdictions, and McNamara also says the company is looking at offering different bodywork around the same chassis. So we could end up with a grid of pseudo Alfas, Auto Unions, Maseratis and Lancias.

Who wouldn’t want to watch that?